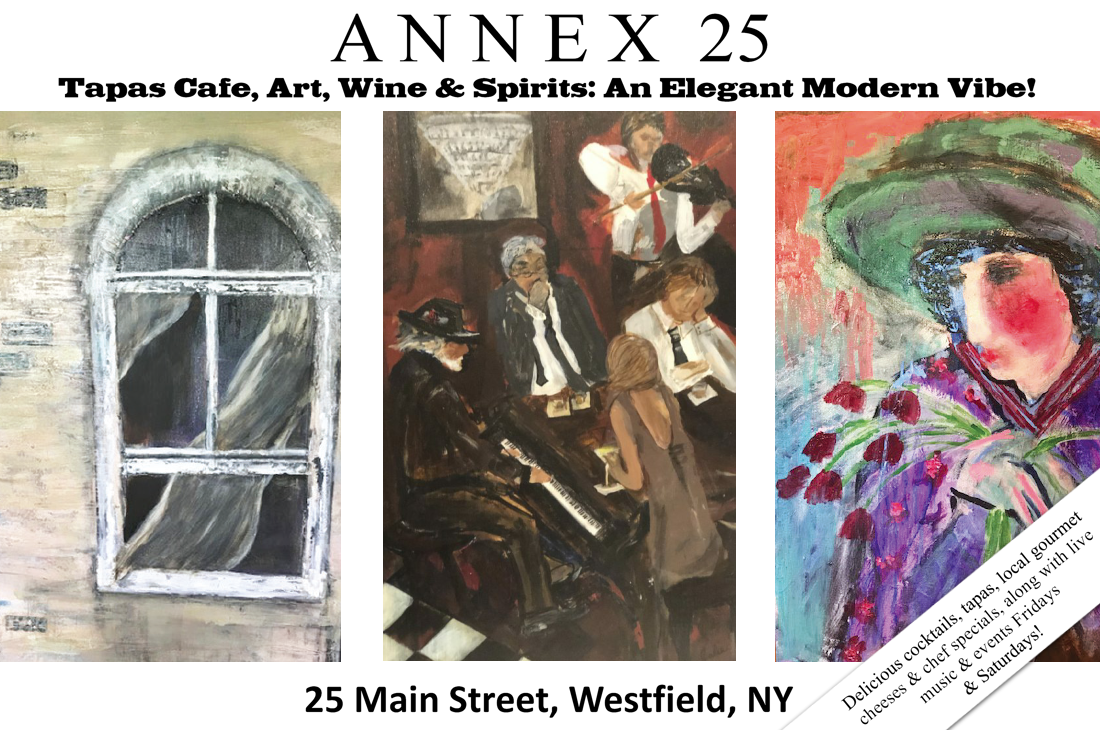 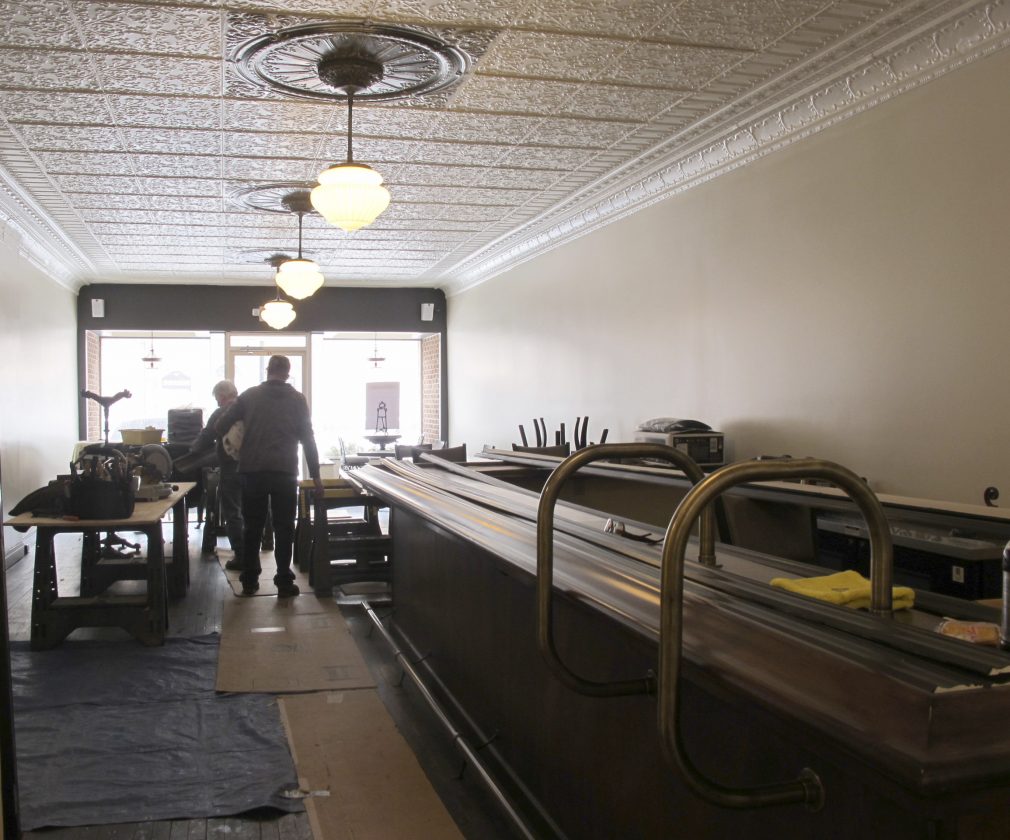 OBSERVER Photo by Mary Heyl Over the next two months, work is being completed on Westfield’s newest business, Annex25, which is slated to open at the end of May. Pictured is the recently-completed custom bar that invites guests to enjoy a local brew along with local music, beginning this spring.
Homecoming...
It wasn’t long, though, before Kleven became inspired by the expansive white walls in her new home: “I picked up my brush and I haven’t stopped yet. It was like a fever.” The brush to which she was referring, of course, was her paintbrush — something Kleven thought she would never touch again. With a newfound passion, she began giving life to the images that had previously existed only in her mind.
Kleven described her return to painting in her own words:

“There I stood like a warrior suited for battle,” she recalled. “Sixty years old, legally blind and my legs weakened from multiple sclerosis. … I struck with intent, my arms moving swiftly back and forth with each stroke. Exhilaration spilled over me, warming my rawness, exposing what felt natural to me. I completed that painting, and with each painting that followed, a sense of accomplishment and pride replaced what was once a feeling of boredom and uselessness.”

But Kleven’s creativity did not end with the walls of her home. One afternoon during the summer of 2016, Kleven and a friend were walking on Main Street and noticed a “For Rent” sign in the window of 25 Main Street, the former flower shop. “I peeked in, and was instantly inspired,” she said of the long gallery-like building.

Instead of renting the building, Kleven bought it and closed on the space in May of 2018. She soon realized she had her work cut out for her. Drop ceilings, dated and aging fixtures, and much-need plumbing and electrical work kept Kleven’s talented group of carpenters and contractors busy for several months. Now, just two months away from Kleven’s planned opening date of May 31, 25 Main Street — Annex25 — is nearing completion, and the space is every bit as inspiring as Kleven, herself.

“I’m probably happier and more content than I’ve ever been,” Kleven smiled, seated in one of the wrought-iron chairs that brings her French Quarter/New Orleans theme to life.


Annex25...
The circa 1853 building is the ideal setting for Kleven’s salon-inspired business that is part art gallery, part lounge and part performance venue. While the building has seen many changes along Main Street over the years, Kleven said that it has always been part of the two buildings that surround it, which were once connected by a center door and staircase before divided into separate buildings in the 1860s. “Part of something — that’s what an annex is,” Kleven explained.

Annex25 promises to be part of something even bigger than its place on Main Street. The modern lounge will seat approximately 45 guests who can enjoy a gallery of rotating artwork inspired by Kleven’s past, present and future. A part-time resident of the American Southwest, Kleven plans to feature the work of her son, New Mexico artist Colin Danna, Kleven’s own work and that of local artists including Susan Mackay of Fredonia and others.

The building itself is a work of art, as Kleven and her talented team uncovered and restored the pressed-tin ceiling, maple floors and woodwork. The unique “bones” of the building are complemented by Kleven’s incorporation of curved, wrought iron tables and chairs, which will expand into outdoor bistro-style seating in the summer months, complete with flowering window boxes. The striking custom bar will serve a variety of local, domestic and imported wines, craft cocktails and beers. Importantly, the swivel bar stools will allow guests to engage with each other and the pianist nearby, said Kleven. Just beyond the bar in the back of the building, Kleven installed a kitchen where tasty tapas and hors d’oeuvres will be made. While Annex25 is not a full restaurant per se, it will serve a “limited but delicious menu,” Kleven explained.

Kleven is also excited about another important feature of the space: a mid-century baby grand piano “made in Buffalo in the 1950s, just like me,” she laughed. Indeed, Annex25 will feature weekly live music and special events, including jazz on Wednesday and Thursday nights and a variety of area musicians on Friday and Saturday nights. “The music will start between 6 and 7 p.m. and conclude around 9 to 10 p.m.,” Kleven explained. A seasonal business, Annex25 will be open from the end of May until October, and already, Kleven has every Friday and Saturday night from May 31 through Sept. 14 booked with musicians.

“Everything has just been falling into place,” said Kleven of her performance schedule. Jazz pianist Steve Davis, acoustic guitarist Doug Phillips, vocal and piano duo Kate & Jack, and Mambo, a Latin-infused rock, pop and jazz band from Erie, Pennsylvania are just some of the performers booked for Annex25’s inaugural season.


Celebrating the arts...
Although Kleven is not a musician, she has always appreciated musicians as fellow artists. Even in her early paintings, before the idea for Annex25 was born, Kleven was inspired by images of a pianist performing in a lounge-style setting. To see more of Kleven’s work and find the latest news about Annex25, visit www.annex25.com.

Although it is exciting for Kleven to see her dream come to life, she is even more excited about bringing the community together in a new way, in a new space. “Artists have to support one another,” she explained. “Whether they’re musicians, artists, photographers or writers. It’s the arts. Without the arts, what would we be? Nothing.”